LushLOD Trees are Unity Tree Creator trees which have been converted and modified. If you want to convert your own trees, the conversion process will be discussed in a later topic.

By displaying billboards on distant trees, it is possible to render thousands of trees onto the screen with minimal cost of frame rate, even on older graphics cards and mobile devices.

Transitions occur when the game is active, as you move the main camera away from a LushLOD Tree. A script which is attached to the tree will measure the distance between the camera and the tree, to gradually transition between the high quality mesh and the billboard mesh, to minimize abrupt changes in the appearance of the tree during the transition.

LushLOD Trees have several different quality levels that affect the billboards. At the lowest quality level, the billboards are rendered with a very simple shader. This may work good if you wish to squeeze out a little more frames per second on mobile graphics cards. The highest quality level for the billboards is "Ultra", which uses state-of-the-art post processing effects and advanced shaders to smoothen out hard edges and blend seams in the billboards, and improve the quality of the transitions.

We will discuss the manager in more depth in another topic. But for now I'll just briefly mention what it is. The manager is a script that is attached to a game object which appears in your hierarchy. It has options which allow you to quickly and easily change the color and quality of all of the LushLOD Trees in your scene.

For this quick start guide, we will use the same LushLOD trees that are seen in the demo scene, to create a new scene from scratch. LushLOD Trees come as "ready to use" prefab files that can be simply dragged and dropped into a scene with minimal setup required.

Once you finish, you should see a folder named "Output" located at Assets / LushLOD Trees / Output.

Now would be a good time to discuss the difference between the fast and standard trees. The trees in the "FAST" folder are not necessarily very much faster than the trees in the "STANDARD" folder. They simply use the "fast" version of Unity's Tree Creator shader, which is called TreeCreatorLeavesFast.

When you create an editable tree using Unity's Tree Creator, you have the option to use one of two different shaders for the leaves. One shader is called TreeCreatorLeaves, and the other is called TreeCreatorLeavesFast. When converting these trees into LushLOD Trees, the shader you chose to use when you make your Tree Creator tree will affect the shader that is used once it is converted into a LushLOD Tree.

Interesting NOTE: Some of the trees found in these folders were originally just basic, non-editable meshes which were part of the Standard Assets -> Environment package created by Unity Technologies. Their original, non-editable version has since been depreciated and is no longer included in the latest versions of Unity. Since then, they have been painstakingly upgraded (by me) into fully editable Unity Tree Creator trees. Those fully editable trees are included in the "LushLOD Trees/Unoptimized Trees" folder. They were then converted into LushLOD Trees. What you are seeing in this Output folder is the latest, ready-to-use LushLOD Tree version of those trees. Hope you like them!

For this quick start guide, we will use the trees that are in the "STANDARD" output folder.

Let's create the scene, and add a basic terrain object. 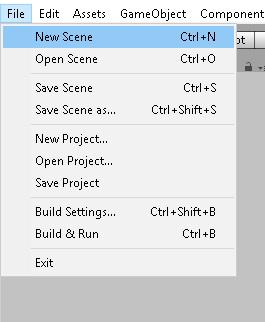 Once you've created a new scene, let's create a basic terrain so that we have some surface area to work with. Select GameObject -> 3D Object -> Terrain to create a flat, basic terrain. 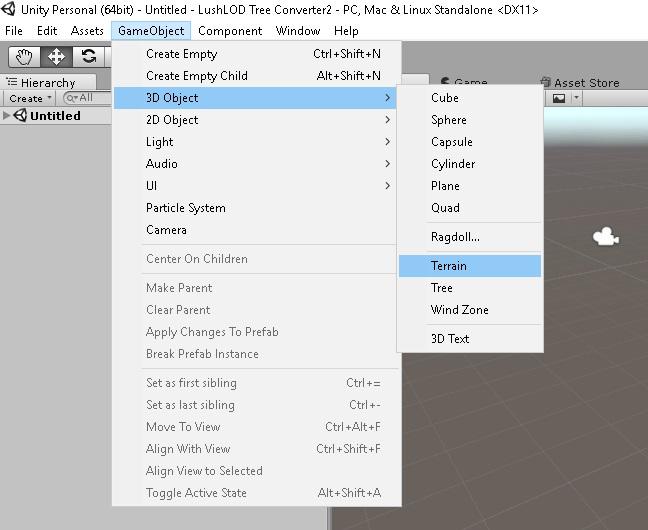 Now you should have a large white-colored, square shaped terrain in the scene. You may need to move the scene camera around to get a better look at it. See image below. 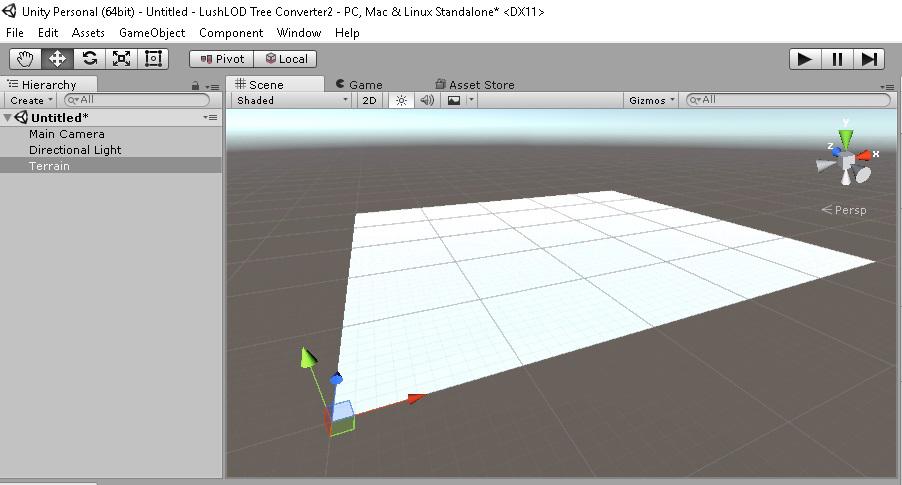 Now we are ready to add some trees to the terrain.

Terrain NOTE: If you are familiar with terrains you may be aware that terrains have a built-in component which can add certain types of trees directly to the terrain data. Please note that LushLOD Trees do not support this method of adding trees to the terrain. 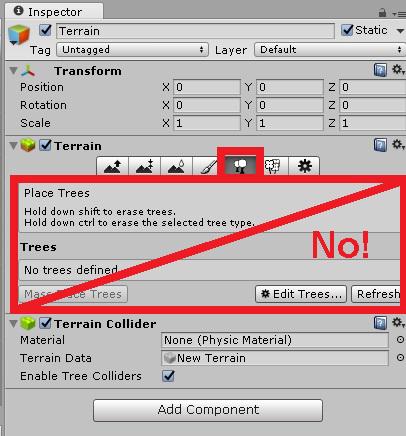 As seen in the above screenshot, there is a "Terrain" component attached to the terrain, which has a number of buttons that allow you to add and edit trees on the terrain. This feature is NOT supported by LushLOD Trees.

However, if you have a scene that already has a terrain with trees added to it, and you want to convert your scene to LushLOD Trees, there is a Scene Converter tool to do this for you. The Scene Converter will be discussed in another topic.

LushLOD Trees support a variety of powerful third-party tools to add trees to your terrain, including Gaia and Terrain Composer 2, both of which can be purchased on the Asset Store from other vendors. I will be creating separate tutorials to demonstrate how to create beautiful terrains using these tools along with LushLOD Trees. Expect to see those tutorials soon, in a later topic.

For this quick start guide, we will not be using any fancy tools or automated system to add trees to the terrain. Neither are we going to attempt to create a beautiful, photo-realistic terrain. For now, we will simply drag and drop some trees onto this basic terrain to demonstrate how easy it is to make the trees work.

Adding Trees to the Scene

Select the Alder tree prefab, and drag and drop it onto the terrain. 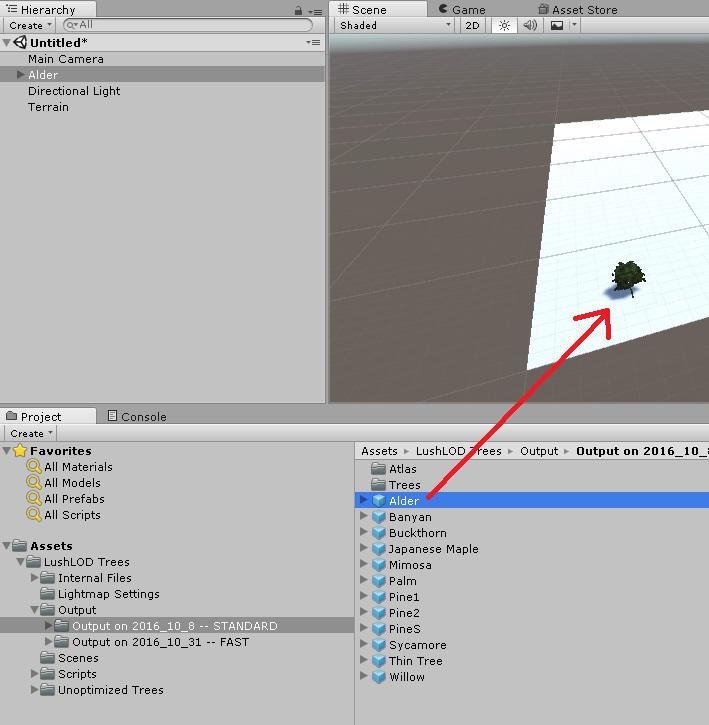 You can drag and drop as many of the trees as you like, before continuing to the next step. :) 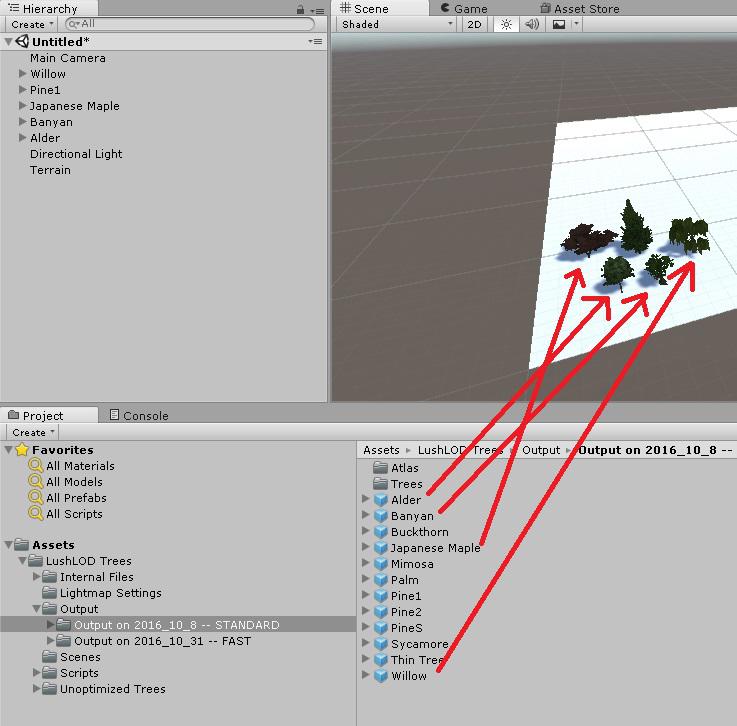 Now we've finished adding trees to the scene, let's set up the manager.

After you've selected a tree, the Inspector window will have a button with the text "Create _LushLODTreesManager". Click that button to create the manager. 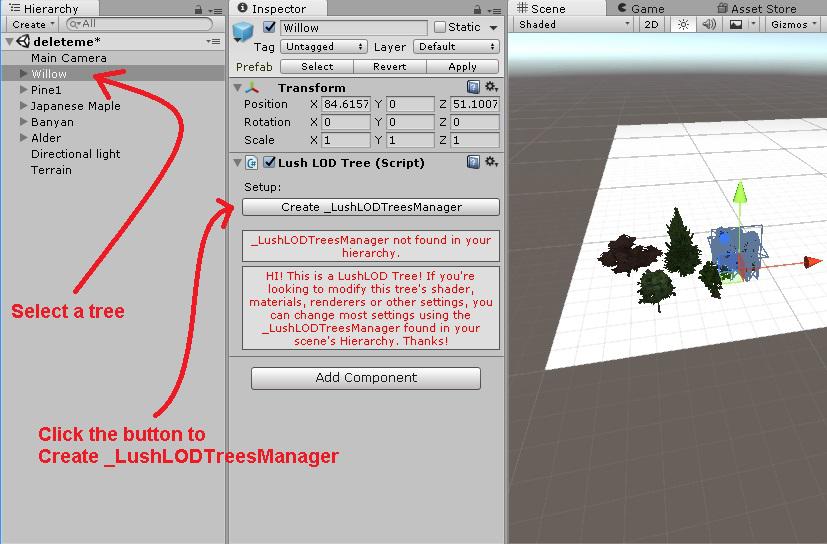 The manager will automatically be selected when it is created this way.

With the manager now selected, click the button in the Inspector window to "Setup Trees Root". 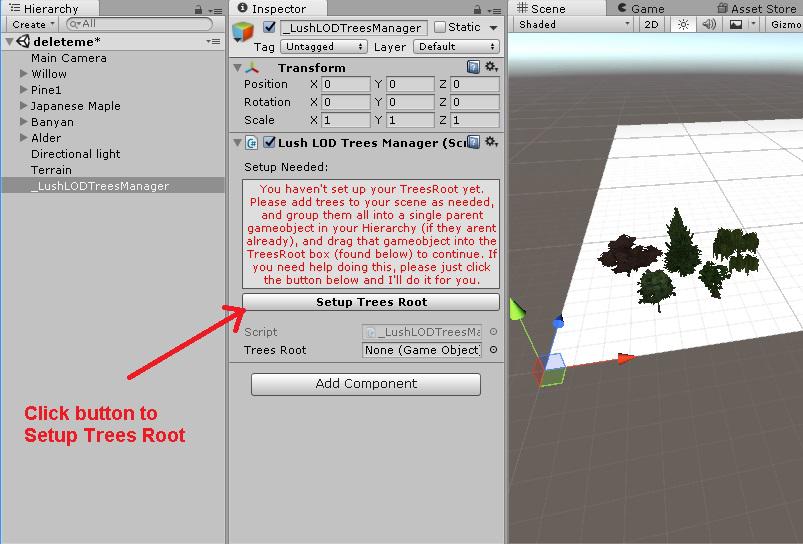 A new GameObject named TreesRoot will be created, and all the trees will be moved into it in the Hierarchy automatically. 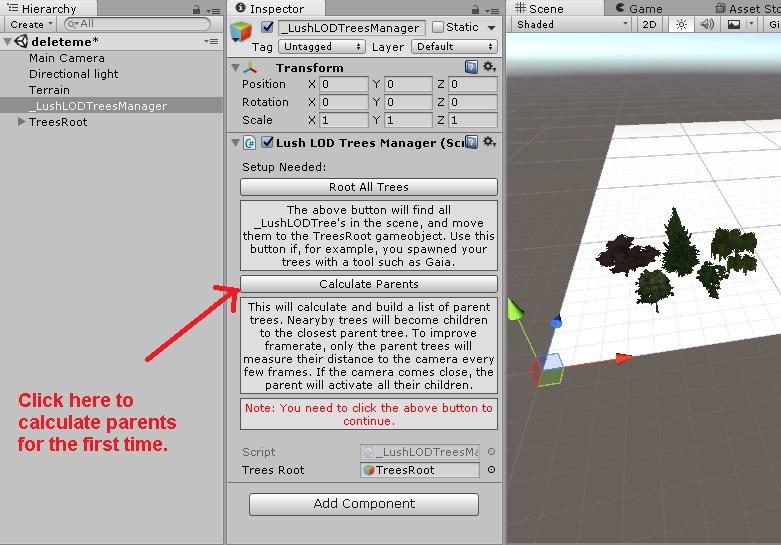 LushLOD Trees use a custom lighting setup that supports baked shadows. To make it work correctly, the manager needs to know which light is your main directional light.

Drag and drop the "Directional light" from your Hierarchy window into this slot in the Inspector window. 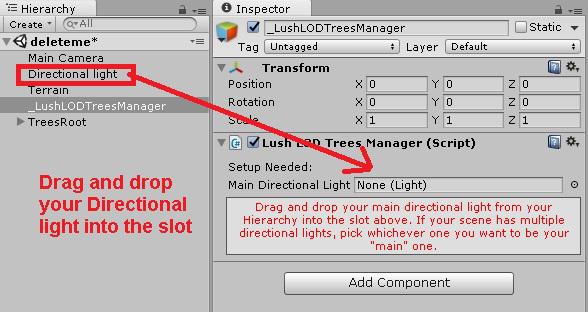 Once you finish, the initial setup of the manager is finished. You should only have to do this once for a scene. Here's what the manager should look like now (more or less):

If your scene is set to use Skybox ambient lighting, you may see some red text in the "Colors" section of the manager, as seen in the above image. Let's fix that issue now. 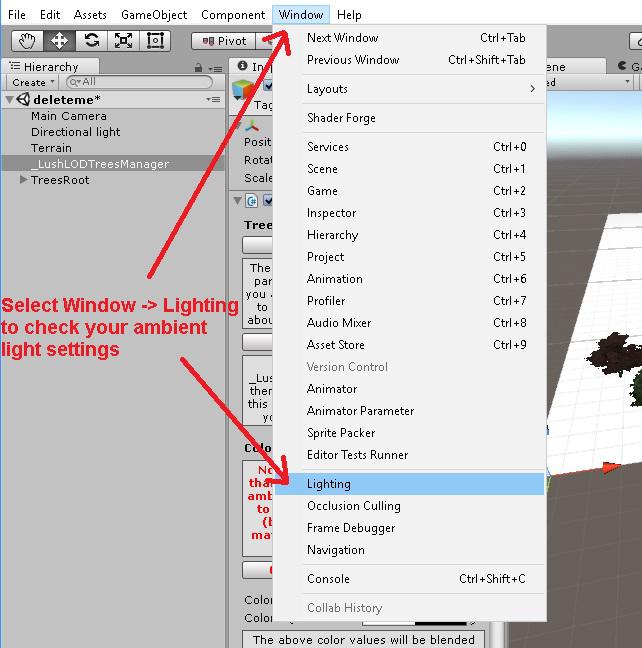 For now, set Ambient Source to "Color", and set Ambient Color to pure white, unless you want your scene to be dark. Note that the billboards display screenshots of the trees with plenty of light, at the time the screenshots were taken. If you need the billboards to look good in darkness, you may want to re-generate them with less lighting. I'll talk more about how to re-generate the trees (or converting new trees) in a later article. 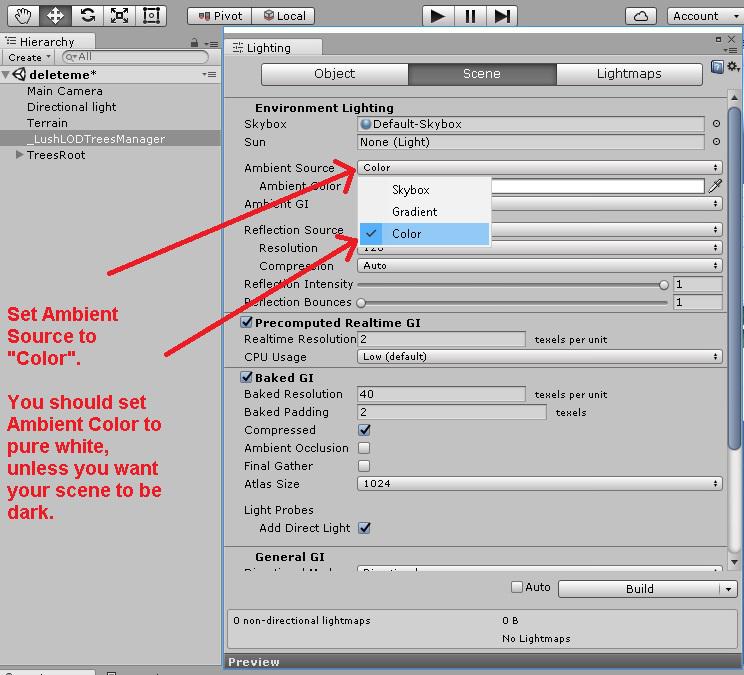 And you're done with the lighting and setup of the manager!

Ultra quality is a billboard quality setting found in the manager. It uses a post-processing effect to smoothen out the transitions between billboards and high quality tree models. To get Ultra quality working, we will need to attach a post-processing script to the main camera. Let's take a look at the correct way to set it all up!

First, with the _LushLODTreesManager game object selected, scroll down in the Inspector window and find the setting named "Billboard Quality". Use the slider on the right to change it to "Ultra". 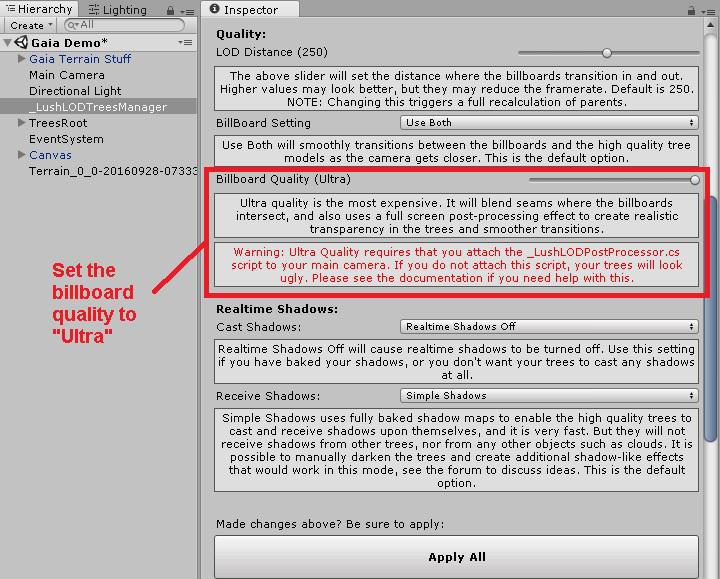 Ultra billboard quality requires a special post-processing script to be attached to the main camera. Let's set that up now.

Note: This step is only required if you plan to use Ultra quality setting.

Select the main camera in the Hierarchy. Then in the Inspector window, click the "Add Component" button. Then select Scripts -> Lush LOD Post Processor. 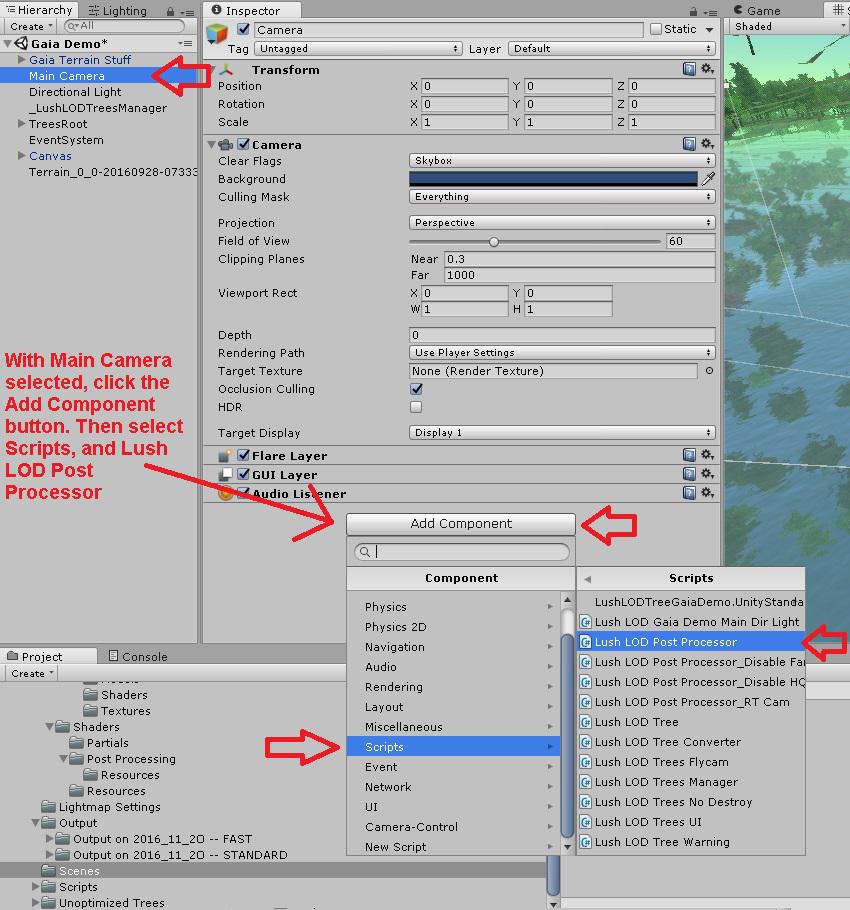 Once to complete the above step, the post processor should now be attached to the Main Camera, and the warning in the manager should now be gone. That's it!

Go ahead and save your scene. In the next part, we will take a look at Water reflections in the Gaia Demo scene.

Note: This step is only required if you plan to use Ultra quality setting.

For this part of the guide, we'll need to open the "Gaia Demo" scene. You'll find it in your project folder at "Assets -> LushLOD Trees -> Scenes -> Gaia Demo.scene". Go ahead and open that scene now.

In the Gaia demo scene, there are some water reflection cameras that make the pretty water reflections possible. Those cameras render a lower resolution image of the scene, which is drawn directly onto the water, to create the reflection.

If your scene has any reflection cameras, or other secondary cameras that will be rendering the trees, you will need to decide how you wish for those cameras to perform the necessary post-processing effect (if you plan to use Ultra quality setting). Otherwise, the trees will look terrible when they appear in your secondary cameras.

Rather than attaching the full post-processing effect to these secondary cameras, you may wish to simply turn off the "Ultra" quality effects on these cameras. This is effective for water reflection cameras in particular, because they render such a low quality image (and a distorted image) of the scene, that you can't clearly see the trees anyway, so there is no benefit in using Ultra quality on the water reflections.

So here's how the water works in the Gaia Demo scene:

In the Gaia Demo scene, find the game object named "Gaia Terrain Stuff". It's in the Hierarchy window. And inside of it, you'll find a camera named "WaterReflectionMain Camera". Select that camera. 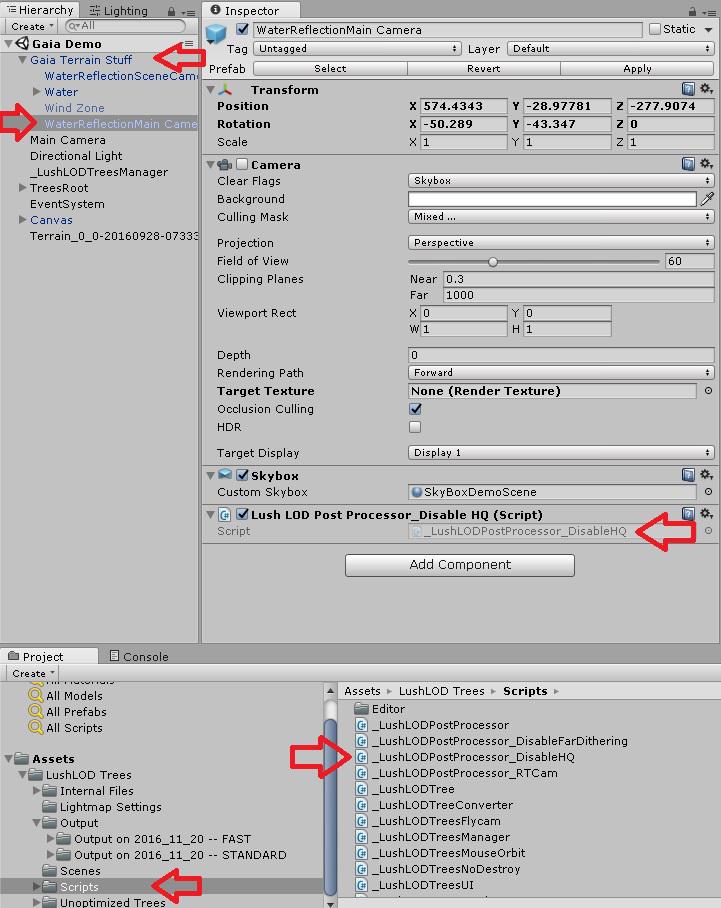 But this isn't the only script that I've included to help you handle your secondary cameras. There are a number of scripts that you can attach to your camera(s) in your scene, to help with rendering the trees on Ultra quality setting. They are all found in the LushLOD Trees -> Scripts folder. Let's look at what each script does.

Congratulations! Your trees are ready to be viewed.

Save then scene, hit play, and enjoy!

Why this article is not helpful?