I did notice something weird; all the (unoptimized) trees that came with the asset were different in that they didn't have certain settings in the inspector (for the tree's root node), that my own trees has - I think some of them had to do with ambient occlusion, but I don't quite remember. Anyway, I actually did try to convert the trees with ambient occlusion disabled, but it didn't affect the flickering.

Also, just remembered that I found two minor bugs that I meant to tell you about:

Something must definitely have changed in the wind system. I made a fresh scene, added a plane and a wind zone, then added the following trees:

I then tested out how they react to varying levels of wind (main wind, no turbulence): 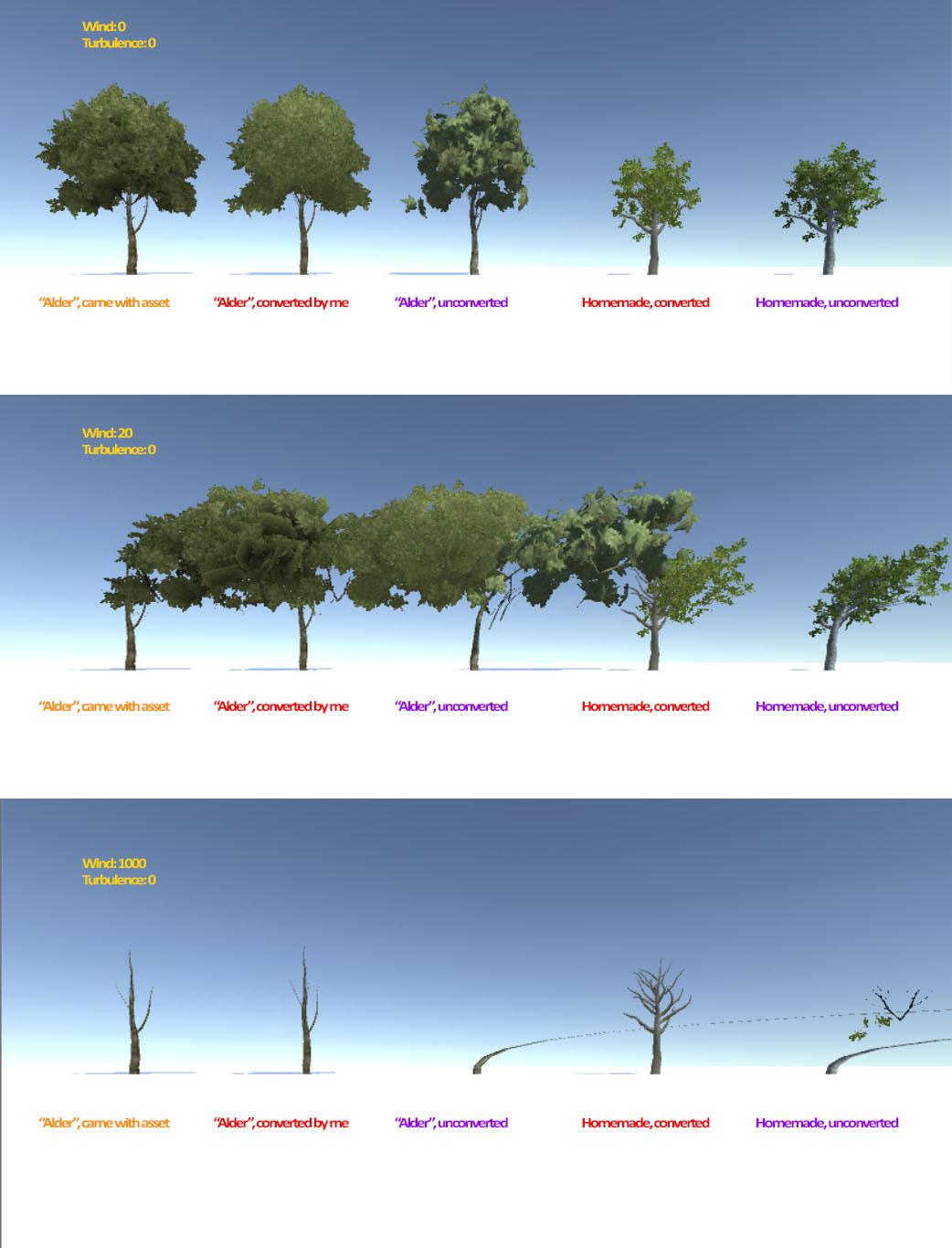 I'll look into the shadow issues immediately, and let you know what I find.

I've implemented the hack, and I have to say it all runs way smoother than I'd have ever hoped for!!! So thank you for making this awesome plugin :) And thanks for the amazing support!!!

However, it's still quite laggy, and the main lags seem to be a combination of the _LushLODTree instances and camera culling. 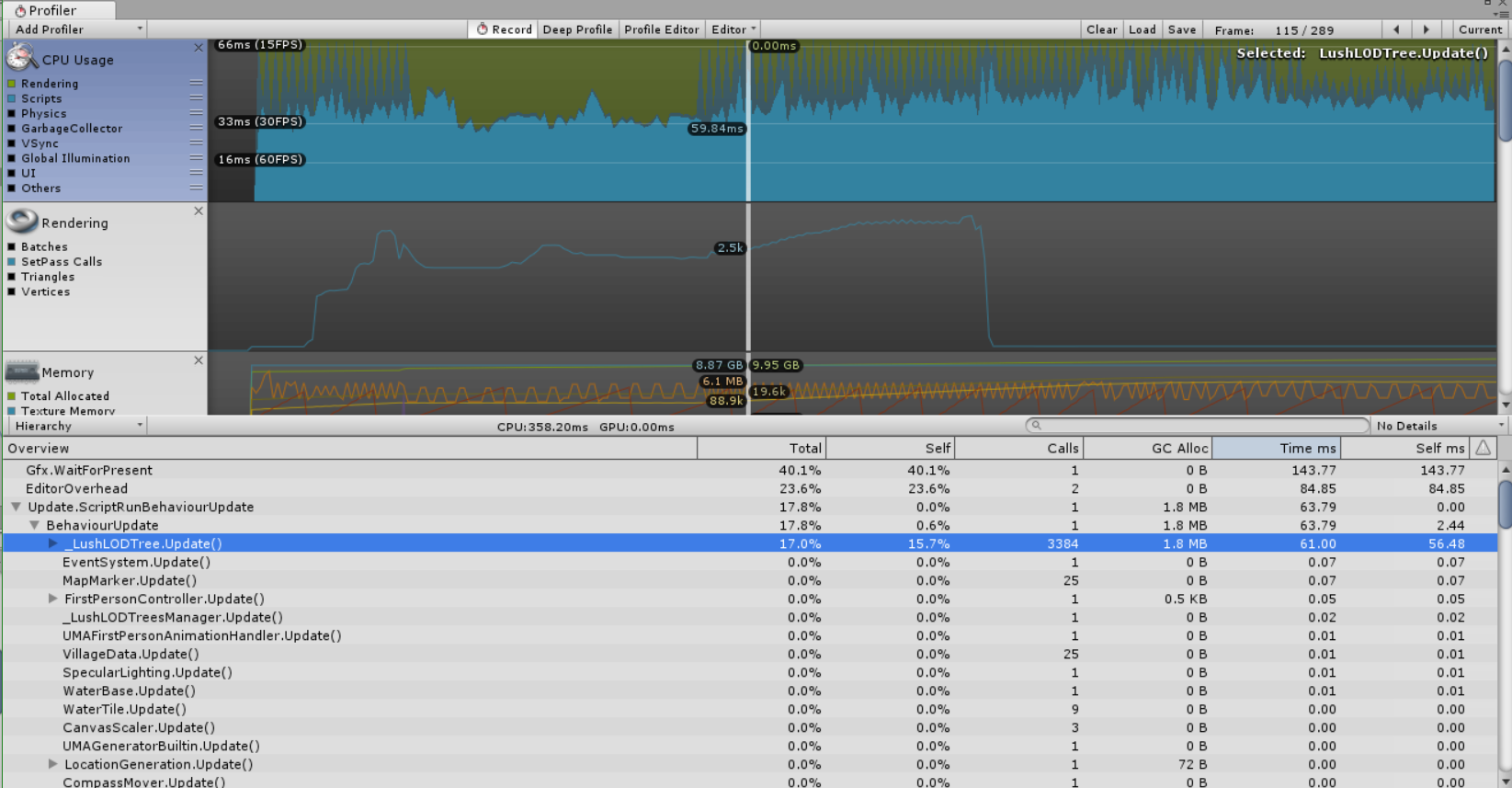 It's most prelavent when generating new trees. I already told the manager to return out of RecalculateParents, until my tree instantiation queue is 0. During runtime, I'm instantiating maybe 20 trees per update frame and although the RecalculateParents isn't executed until all trees have been placed, there's still a lot of _LushLODTree activity for each update frame.

Edit: Somehow I got better performance by using forward rendering instead of deffered. Also, I forgot to set the quality from ultra to low the last time I transfered the project from my powerful desktop to my not so powerful laptop (which I'm on now), so that helped as well.

Still, it's running unacceptably slow and the heavy load seems to originate from each LushLOD tree's update function, every single frame. There are around 3000-5000 trees at any given time.

Wait a second, perhaps I should disable the logging function and try again - obviously that would cause a huge lag!! :D

I tried implementing the if(ByPassChangedChecks == false) to all the 3 places where ShaderSettingsChanged gets incremented. Now, after a while, the game runs! And the trees appears as they should!

However, it's extremely laggy, and I don't know why because according to the log, the only thing that happens for each frame is that the manager's update method is called, followed by the update method for each tree, but nothing besides that (well, the manager calls GetBillboardShadowCastingMode a few times during the frame, but that's it!)

Here's the dump. I added a frame counter to make sure that it's indeed all happening in the same frame:

I forgot to disable the writing of each method name to the log file, but you can just comment out the WriteToLog method, which is right below the properties.

Edit: sorry, it's called WriteToLogFile - it's on line 378 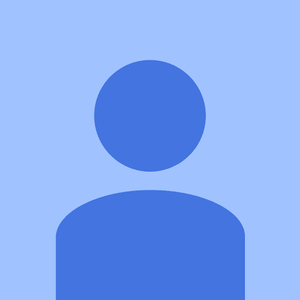